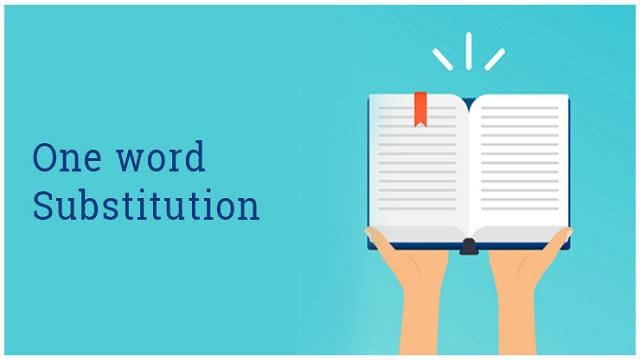 One-Word Substitutes: A Word that is used in place of a complete sentence

This book covers the following topics:

05a. That which cannot be harmful or dangerous -- Innocuous
05b. Causing serious harm in a gradual or unnoticeable way -- Insidious

08a. To suddenly change direction -- Deflect
08b. To keep on changing direction during movement -- Meander

09a. Ability to know something on the basis of feelings rather than reasoning -- Intuition
09b. Ability to speak without moving your lips -- Ventriloquism

10a. To change a law in order to improve it -- Amend
10b. To correct the mistakes in the manuscript, etc. -- Emend

12a. Animals having spinal column -- Vertebrate
12b. An animal with thick skin -- Pachyderm

13a. Obeying rules and requests -- Compliance
13b. Open refusal to obey -- Defiance

17a. A religious song -- Hymn
17b. A pleasant song used for causing children to sleep -- Lullaby

20a. To increase the intensity of a disease -- Aggravate
20b. To go from bad to worse – Deteriorate

21a. A school for small children -- Kindergarten
21b. A student who has left school or class without permission -- Truant

22a. To free somebody from all blame -- Exonerate
22b. To free a person from a charge by verdict -- Acquit

24a. An office with a high salary but no work -- Sinecure
24b. A position in an organization without salary -- Honorary